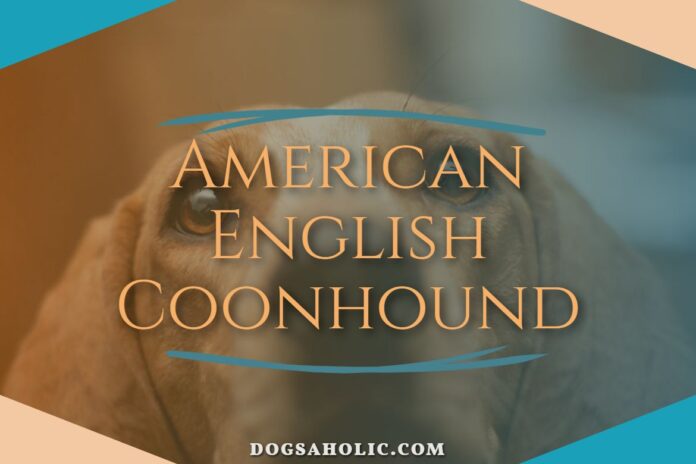 The American English Coonhound, like the other Coonhound breeds, originated in the United States. They were developed for hunting in the rough terrain of Southern United States to hunt small game such as raccoons but also bigger game like bears and cougars. They were popular among hunters for their intelligence, endurance, and speed. 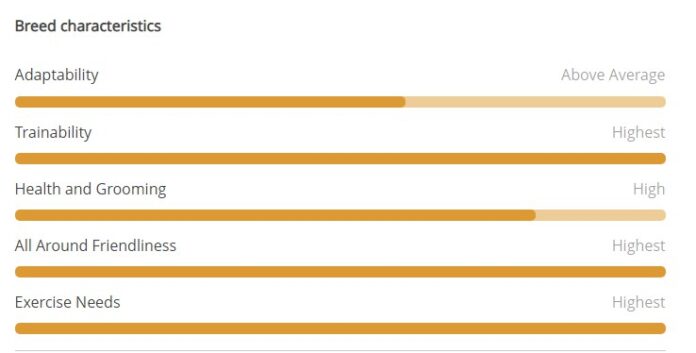 Today, they are still prized among hunters and excel in dog sports such as tracking, field trials, agility, and obedience and are also beloved family companions. Despite their talents, they are fairly hard to come by and usually require a long wait if one did manage to find a reputable breeder.

They are an active breed and make a great addition to the active family or for those willing to make the commitment to involve them in plenty of physical activity. This intelligent breed develops behavioral issues if they don’t get sufficient exercise and they thrive on human companionship and get along great with children and other dogs as long as they have been properly socialized.

The breed has a high prey drive and might chase smaller critters if they haven’t been raised together. Their ideal home would be a farm or a fenced acreage where they can safely run and roam around. The breed is friendly, alert, devoted, affectionate, and gentle.

One of the six Coonhound breeds, the American English Coonhound originated in the Southern United States around the 17-18th century. Descendant from the American Foxhounds, Virginia Hounds, and Bloodhounds they were designed for hunting bigger game and treeing smaller critters such as cougars, raccoons and bears as well as managing the rough terrain.

They were known to go by the names Virginia Hounds, English Coonhounds and Redtick Coonhounds before their present name was officially adopted.

The Bluetick Hounds and the Treeing walkers were also known as American English Coonhounds until 1945 when they were officially recognized as separate breeds. They were and still are famous among hunters for their energy levels and stamina, keen nose and relentless work ethic in the field. The breed was officially recognized by the AKC in 2011 and ranks 171st most popular breed.

The American English Coonhound is a versatile breed. They do well as a family companion as well as an excellent hunting partner. They make a great addition for the active family or individuals that can keep up with their exercise demands. They are far from being couch potatoes and need an extensive exercise routine to maintain a happy disposition.

If you aren’t an active individual or don’t have the time to commit to a daily exercise regime then this is not the breed for you. As long as they are sufficiently exercised, the American English Coonhounds are wonderful companions. They are loyal, friendly, and affectionate towards everyone, which makes them a poor choice for a guard dog but they will alert you to newcomers which makes them an effective watchdog.

Devoted companions to children with a sweet and social deposition towards other dogs and most other critters, the ideal home for them would be a large fenced acreage where they can safely roam around and run. The American English Coonhound is a vocal breed, something to consider if you have neighbors nearby. They are athletic, kind, and friendly.

The breed is generally considered to be healthy and sturdy except for their tendency to overheat in the field. Some individuals are more prone to certain conditions than others. Most reputable breeders test their dogs prior to breeding for any hereditary or genetic issues, they also test the litters for any such conditions.

The majority of reputable shelters make sure the puppy or dog has received a clean bill of health from the vet prior to adoption. Backyard breeders should be treated with caution as most of them don’t have the necessary knowledge and understanding of the breed and might cause future litters to develop behavioral issues and health problems they wouldn’t otherwise develop.

Never purchase a puppy from a puppy mill as those organizations prioritize financial gain over the emotional and physical well-being of the dogs in their care.

With proper nutrition, regular exercise, and often vet visits, your companion will remain by your side for many years to come.

All breeds need proper socialization to become well-rounded and emotionally balanced dogs, the American English Coonhounds are no different. The process of introducing the puppy to new people, children, other pets, environments, and different scenarios should begin as soon as possible.

The new experiences should be positive and stress-free to avoid developing potential anxiety issues associated with a specific person or situation. Encouraging friends and family to visit the home after the arrival of the furry best friend, taking them with you to run errands and on car rides as well as to the dog park once they have been fully vaccinated, to socialize them with other dogs are all good ways to introduce the new member of the family to the big world.

Enrolling them in puppy kindergarten is also highly recommended as it provides support and professional guidance not only to the puppy but also to the handler.

The American English Coonhounds are fairly easy to train as they are very intelligent and eager to please. They do require more patience and repetition than most breeds as they can be strong-willed and easily distracted.

They need a handler with a natural air of authority who can be consistent and firm, someone who can set boundaries and reinforce them using treats and plenty of praise. The breed does best with an assertive and kind handler that understands the breed and its needs.

Most behavior issues of the American English Coonhound begin with the lack of exercise or not enough of it. They are a prized breed among hunters for their stamina and speed and to expect anything less than an active athletic dog would be doing them an injustice.

They need daily exercise in the form of long vigorous walks, hikes, runs, and hunting trips. They do best when they are on the move, if you can’t provide that then maybe another breed would suit your household better. Without proper exercise, they may develop bad habits and become anxious, hyperactive, bored, and destructive.

Involving them in various dog sports is also highly beneficial, such as agility and obedience, field trials, and tracking. Not only would they get the exercise and the mental stimulation they require, but it is also a good opportunity for them to socialize with other dogs and people.

The American English Coonhounds are famous for their keen nose and one-track mind when on a trail. They should be leashed at all times when they are not in a safe and secure location to avoid dangerous situations for them and others, as they tend to follow their noses and when they pick up an interesting scent nothing else matters.

They should also be provided with identification methods such as a microchip and a tag with the owner’s current address and phone number for a quick and safe return.

Crate training is another efficient training tool, it has been known to cut housetraining time in half as long as the puppy gets consistent bathroom breaks in the same spot and at the same time followed by plenty of praise and treats.

Crate training is also known to help with separation anxiety and curb destructive behavior while the owner is away. The American English Coonhounds are known chewers, it is recommended to puppy proof the home as much as possible as well as to crate train them.

Beginning for a few hours at a time, the dog gets used to the crate and it becomes their special spot where they can retire when they are tired or need space. Crate training should never be used as punishment.

The breed loves the outdoors and makes a good watchdog; however, they shouldn’t live outdoors by themselves. They love their families and thrive on human companionship. Like most breeds, they do very well in homes where they are treated as part of the pack and are involved in the family’s daily activities. They do better in homes where stress levels and raised voices are minimal.

The American English Coonhound is an active breed and naturally consumes more food than a couch potato or a senior dog. The recommended daily consumption is individual to each dog and depends on their age, size, and activity level.

The choice of diet might be overwhelming with the many options available on the market and might require some trial and error before finding the brand and flavor your companion loves the most.

It is recommended to choose a diet that is free of unnecessary additives such as corn or grain, rich in meat protein high-quality diet. It is also recommended to divide the daily consumption into 2-3 meals a day instead of leaving it available all the time to help your companion maintain a healthy weight and avoid boredom eating.

The weather-resistant hard coat is easy to maintain and only requires weekly brushing or combing to avoid tangles and mats and limit the amount of hair floating around the house as they are average shedders. The coat comes in a variety of colors, most common are white, red, black, and blue in bluetick, tricolor tick, and Reddick patterns.

The American English Coonhounds are friendly with everyone and children especially. They are kind, loyal, and affectionate and have the energy levels to keep up with the younger members of the family, running around in the yard and never refusing a game of fetch.

The foundation of mutual love and respect should be laid down before introducing the American English Coonhound. Children should be taught boundaries and respect towards their four-legged friends. An alarming number of canine companions are surrendered to shelters, abandoned, put down, and re-homed yearly due to the adults’ failure on educating the younger members on proper dog handling etiquette.

Playtime between dogs and children should be supervised by an adult at all times and an ear or tail pulling as well as any general teasing should be discouraged immediately.

As a pack dog, the American English Coonhound gets along with most critters and is friendly toward other dogs as well as cats as long as they have been raised together. They do have a strong prey drive and should be supervised around smaller animals as they might chase them until and if they accept the smaller critters as members of the pack.

Although each breed shares similar traits, each dog should be treated as an individual. Their behavior, manners, and temperament strongly depend on breeding, training, environment, socialization, and handler.

The American English Coonhounds make a great family companion. They have a sweet and gentle deposition and get along great with most people and critters as long as they have been properly socialized.

They make a great demand on one’s time as they need plenty of mental and physical stimulation, but they are worth it and give so much more in return. They are sociable, reliable, and devoted. They make a great watch dog but shouldn’t live outside by themselves.

They do best in a home where they can be part of the pack and can share their lives with their people. The breed is highly intelligent and fairly easy to train, although they get distracted easily and have the tendency to wander off after an interesting scent.

The American English Coonhounds are not suitable for apartment living. They are a fairly rare breed to find, but if you succeeded in finding one, consider yourself lucky. With sufficient exercise, socialization, and training they make a fantastic four-legged best friend. 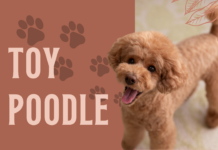 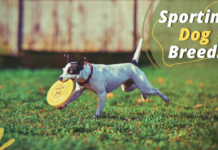 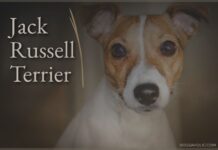